For some years, Ihushi Development Center (IDC) has wanted to start a driving school at its branch in the nearby township of Kisesa. There are many young men and women who want to have a driver's license, but the nearest traffic school is in the city of Mwanza. In today's Tanzania, it's an advantage to have a driving license when looking for a job. Many parents are prepared to pay for the son/daughter to learn to drive a car. Starting a traffic school is therefore both a development effort and an opportunity to increase IDC's revenues. However, getting approval from the authorities for a driving school has proved to be a time-consuming and laborious process.

Already in 2014, IDC repaired its old red pick-up so that it was in good condition and possible to use as a driving school vehicle. With the support from Friendship with Ihushi, IDC also prepared  a classroom and provided information material. But the teacher, who had preliminarily accepted to do the teaching, left. Then IDC chose to train its own driver, John Frimatus, and send him to training courses in Dar es Salaam to get the formal skills required. These courses took their time, and it was not until the summer of 2016 before John hade completed them. But then the regulations for driving schools in Tanzania had been rewritten. Higher demands were set on teaching materials, classrooms and vehicles.

In March 2017, IDC and Friendship with Ihushi worked out an action plan for the required changes, for example, the classroom had to be expanded and new teaching materials must be procured. In addition, it was required that the driving school needed two cars for practical instruction and exercise. To solve all this within our tight budget, IDC bought a scrap car (in very

bad condition for a symbolic sum. John Frimatus repaired the car himself, together with a companion.

In September 2017 IDC's driving school was approved by the responsible authority, i.e. the traffic police. Then the IDC leaders were proud to mount the driving school sign on its two cars.

But the bureaucracy did not end with the traffic police's approval. IDC's driving school must also be registered with the Tanzania Revenue Authority, so that the students could get the special student certificates required for driving on a road. Therefore,  it was not until January 2018 that John Frimatus at last  could gather the first group of students and start teaching. 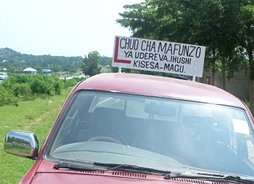 John Frimatus was part of the first group at IDC's vocational school and graduated as a carpenter in 2003.

Two years later he got an opportunity to take a driving license and has since worked as a driver, responsible for IDC's pick-up and truck.

John is a calm and experienced driver who has every chance to become a good  driving school teacher. 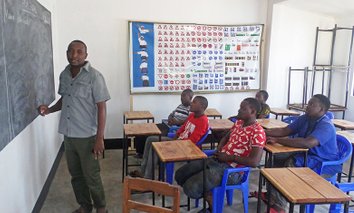