Ihushi is located in a region which early became hard hit by HIV/AIDS, although it was not something people talked about in the village in the 1990s. But within IDC the issue was discussed and in 2002 a campaign was started with a series of meetings and workshops in various locations in Ihushi and neighboring villages. The aim was to "break the silence about HIV." 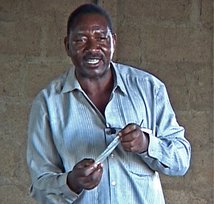 In the summer of 2005, IDC was ready to start a more action-oriented HIV/AIDS program, where "peer educators" are the key. In each one of the 13 "sub-villages" included in the area, four villagers were selected and trained to inform about HIV/AIDS and to support those families who were affected.

The 52 "peer educators" have since received further training by IDC and thy have played a crucial role in raising awareness about HIV/AIDS. IDC has also worked to ensure that the villagers would have the possibility to be tested for HIV.

The AIDS situation has significantly improved in recent years, but still "peer educators" are important in the ongoing activities. Today, for example, they have an important role in supporting those with AIDS to take their ARVs properly.

IDC's chairperson, Emmanuel Buguba, with a condom at a seminar, 2003.

A "peer educator" speaks at a village meeting in Matale, a neighbouring village to Ihushi.

Testing for HIV is necessary, because the virus is so prevalent and the risk so great. But it was long before HIV testing became available in Ihushi. In order to influence the authorities and increase availability, IDC carried out "testing campaigns", when a test team was employed at the learning center for shorter periods. For example, during an intensive three-week period in autumn 2007, 375 villagers were tested. Such testing periods were conducted several times during 2006-2009, but is no longer needed. Now testing opportunities are provided through the public healthcare system.