Kwimba District is located south east of Magu District to which Ihushi belongs. The principal town of Kwimba is called Ngudu and is located around 100 km from Ihushi. In autumn 2012, IDC received a contract to construct a rain water tank at a health clinic in Kwimba. It was a test to see if IDC had the ability to build sustainable water tanks. In Kwimba they had in fact had problems with tanks built 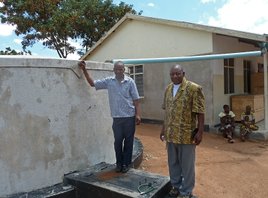 by local artisans, because the tank walls had not been strong enough, and they cracked. The tank IDC built with the help of the young people in the vocational school was big, 60 m3, but showed no deficiencies six months later and principals in Kwimba were very happy. Julius Swai, to the left in the photo, says he is delighted to collaborate with IDC.

Julius Swai is coordinator in Kwimba of the district's TASAF projects. TASAF stands for "Tanzania Social Action Fund" and is a govern-ment development fund that can be used at the district level for improvements in school buildings, health clinics, water supply, etc.

In late February this year, IDC got a new contract

to build rainwater tanks in Kwimba, this time at seven secondary schools. A team of eight masons began working with the first tank on 6th March. The team included both second-year students and former students of IDC's vocational school. The teamleader was Malendeja Emmanuel. 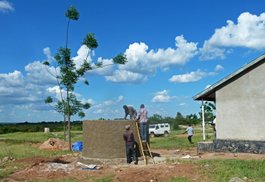 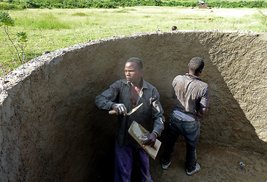 It takes about seven days for a team to build a tank of 25 m3, and in mid-April they had success-fully finished building six tanks. But the work on the seventh had to be postponed, as the building site had been inaccessible by road due to heavy rains. It was, however, possible to complete the work in the beginning of July.