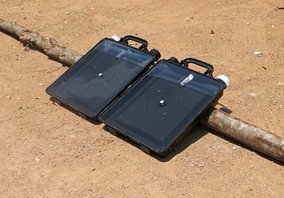 in the sun (as shown in the picture below), the water is purified by heat and the sun's ultraviolet light. No chemicals are used. After 2-6 hours the

water is drinkable and can be used for cooking or hygiene.

In 2013, Lage Bergström (the secretary of Friendship with Ihushi) brought a Solvatten container to Ihushi, showing it for the leadership of Ihushi Development Centre (IDC) and for one of the women's groups. Most households in Ihushi are fetching water from a shallow well

and the water has to be boiled before it is safe to drink. Boiling takes time and requires a lot of firewood which is in short supply. When Lage told about the Solvatten purification, everyone was very interested and would love to have a container of their own – even if they said that there had to be some hocus-pocus involved if a black container could clean water...

However, when the price of a container was said, the women fell silent and started talking about other things. A Solvatten unit costs about SEK 800: - (plus shipping costs), and the women perceived this to be an unthinkable investment. But when IDC leaders discussed further, they concluded that the price may not be impossible if compared to the cost of firewood. You have to be very convinced, however, about the container's benefits to be prepared to make such a commitment.

Since then, Friendship with Ihushi have sought an opportunity to fund the purchase of Solvatten containers to spread among women in Ihushi so that they can test this purification method and discover the benefits. In January 2015, we contacted the Soroptimist International of Sweden and learned that they have a project to spread Solvatten containers to women in Africa.

Soroptimist International is one of the world's major non-political organizations for professional women of all ages. The name comes from Latin's "soror optima" which translates to "sisters for the best". In Sweden there are about 50 clubs working for the advancement of gender equality, sustainable development and peace. Read more on <www.soroptimistsweden.se>.

We contacted the Soroptimists' Programme Group for Solvatten. And to our great pleasure, they have decided to cooperate with us and fund a number of Solvatten units. In August 2015 a first shipment of 72 containers arrived in Ihushi. Read more!

During 2016-2017, three more shipments with Solvatten have been sent to Ihushi. Now there are Solvatten containers in every 10th household in the area. Read more!

The German Soroptimist Club in Köln-Römerturm has also contributed to the Solvatten Programme. In the January 2016 issue of the magazine "Soroptima Intern" there is an article about Solvatten and the support for Ihushi. The magazine can be downloaded here (the article is on pages 24-25).