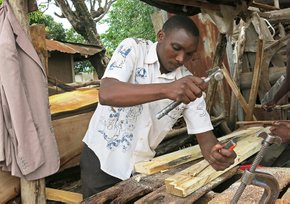 Bahati Joseph is the chairman of the UMI. He graduated at IDC in 2006 and has worked as a carpenter since. In the picture he works with an order on four windows..

Umoja Mafundi Ihushi (UMI) means "Association of artisans in Ihushi". The association was formed in September 2014 by former students at IDC's vocational school. UMI now has 57 members. Many of them are successful artisans (carpenters, masons, welders, tailors, painters, roofers) with a large customer base and stable income.

Amon g UMI members it is common practice to work in groups, where the groups function as a kind of cooperative. Everyone in the group has their own tools, but few have all the tools they need and therefore they borrow from each other. When someone in the group gets a job, for example a carpenter gets an order on doors for a house under construction, he agrees with one or more in the group to do the job together and share the income. This collaboration works well and there are standards for how to share the profit for each job, for example, that the one who has the customer contact gets a bigger share. UMI members are also supporting each other for marketing and sharing contacts.

UMI has organised a micro-credit system for its members of the same kind, which has been so successful among the women's groups. Read more.

In recent years, several of the UMI members have received IDC's second-year students for practice on-the-job. IDC and UMI are planning to further develop this collaboration. The idea is that UMI

members will employ apprentices, who in periods will attend short courses at IDC. IDC will also advise UMI members on how to sup employ and train their apprentices on-the-job.

Pascal Kashonele is the secretary of UMI. He has worked as a mason since he graduated at IDC in 2005.

Today Pascal works almost as a building contractor. He takes on assignments to construct, for example, a residential building, and then he organises a work team with the masons, roofers and carpenters needed.

In periods, Pascal is also working as a mason teacher at IDC. 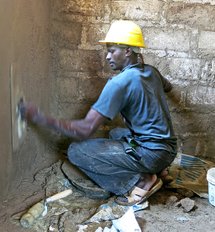 Many of the young women who have graduated at IDC are tailors and working at home with their sewing machines. Only a few of them are members of UMI. But there are also many who have come together in groups and started small tailorings in the area. Most of them are members of the UMI, e.g. Sikuzani Emmanuel. She graduated in 2011 and is now working in the nearby township of Kisesa, together with another former student. 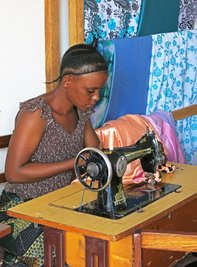